Jackson Pollock artwork can be envisioned as large surfaces of canvas completely covered in strokes of different colors. As such, in most of his artworks, you will rarely find any recognizable object. Jackson Pollock wasn’t always a revolutionary artist. He developed his skill and art style for years before he became famous.

Born in the town of Cody, Wyoming, Jackson Pollock came into this world in 1912. He spent his childhood in the states of Arizona and California. It is the wide-open scenic beauty of the landscape of these states that influenced his expansive artwork greatly.

Then, to later explore the art world with more aggressiveness, he moved to the city of New York to study at the Art Students League. There, he studied for a few years with the great artist of that time – Thomas Hart Benton.

Thomas Hart Benton’s artwork was typically based on everyday American life. As such, one can have a glimpse of Benton’s art style in early Jackson Pollock artwork. However, Pollock later drifted from this style and started to work on his own style – abstract expressionism.

Apart from the influence of Thomas Hart Benton artwork, Jackson Pollock’s artwork was also influenced by many other good artists. For instance, he had a liking for a group of Mexican painters who painted murals. Since some of these painters were working in New York City in the 1930s, Pollock had the opportunity to see those painters work and borrowed several ideas and methods from them. That’s where Pollock learned the use of large canvases to freely paint his ideas.

Besides, Pollock’s work was also inspired by Miro – a Spanish artist who was a part of the movement of Surrealist painters. Surrealists worked on a perspective that true art comes from our unconscious mind, and Pollock agreed with these artists that it is the unconscious mind that plays a vital role in art creation.

What Made Jackson Pollock Artwork World-Famous

Later in the life of Jackson Pollock when he moved to East Hampton with his wife Lee Krasner who was a skilled Abstract Expressionism artist, he came up with a whole new artwork style that made him famous. The country environment and calmness of that place allowed this great artist to explore his potential up to the maximum.

He gave rise to a style called action painting that is often expressed as very physical. Instead of standing upright, Pollock used to place his canvases on the floor so that he can move around all four sides and use very liquid paints. His dripping method allowed Pollock to put energy and enthusiasm into his paintings. In fact, some people called his way of painting as a painterly dance. If you also want to adorn your walls with artwork inspired by the great painter – Jackson Pollock, you can easily get an abstract art painting online that resonates with your style. Don’t wait anymore or search for exhibitions to get your hands on some of the best abstract paintings when you can have them at the comfort of your home and that too at affordable prices.

How to Find the Best Abstract ... 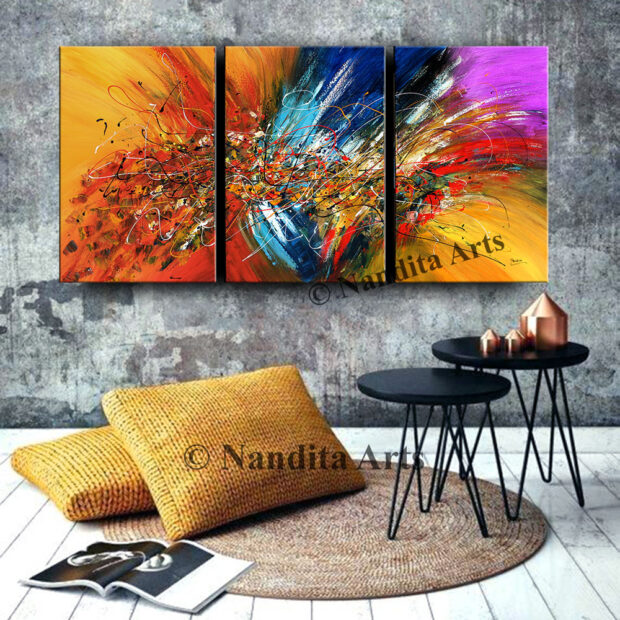 What does Jackson Pollock Wall Art mean and Where to Buy Them?

February 26, 2021 / 879
Jackson Pollock was an American painter who is known for his unique style of the abstract expressionist movement in paintings.  The famous ‘drip painting’ in... Continue reading