Here is What You Should Know about Jackson Pollock Paintings

Jackson Pollock Paintings are worldwide famous. To your surprise, two of the ten most expensive paintings in the world are by Jackson Pollock. Renowned for his reclusive and volatile personality, Jackson Pollock was an American Painter born on January 28, 1912, and considered to have played a major role in the abstract expressionist movement.

Pollock’s work has received recognition and been honored with large-scale retrospective exhibitions at MoMA and The Tate in London. Since he used the Drip Technique in his art, the Time Magazine also entitled Pollock “Jack the Dripper”.

Gained attention for his technique of pouring or splashing liquid household paint onto a horizontal surface (drip technique), he was the artist who viewed and painted his canvases from all angles. Since he used the force of his whole body in a frenetic dancing style, his technique was also referred to as action painting.

Influence of Other Great Painters on Pollock’s Works

You can notice the influence of the work of Thomas Hart Benton, Pablo Picasso, and Joan Miro in Jackson Pollock’s Paintings. Apart from these, there were many other artists, such as Ukrainian American artist Janet Sobel that had influenced Pollock and which ultimately reflected on his paintings.

What was Unique about Pollock’s Painting

Jackson Pollock used household paints instead of artist’s paints, and revealed this tendency as “a natural growth out of a need”. In fact, his technique of pouring and dripping paints is thought to give rise to the term “action painting”.

Pollock challenged the Western tradition of using easel and brush and preferred to stick with his style of painting on the floor because it made him feel nearer and more part of the painting, allowed him to walk around the painting, work from all the sides and literally be in the painting. This style of Pollock was similar to that of the Indian sand painters of the West.

He kept himself away from the usual painter’s tools, such as easel, palette, brushes, etc. Instead, he used sticks, trowels, knives, and dripping fluid paint or a heavy impasto with sand, broken glass, or other foreign matter added. He preferred to tack his canvases to the hard wall or the floor as he wanted to feel the resistance of a hard surface. He always felt at more ease while painting canvases stretched on the floor.

The Game of Numbers on Pollock’s Paintings

Are you a fan of Jackson Pollock Paintings too and want to decorate your office or home with creations like his? We understand that his paintings are way too expensive for common people. So, why not look for Jackson Pollock Style Painting for sale? Honestly, they are not only affordable but will also make a long-lasting impression on your guests, clients, and visitors. 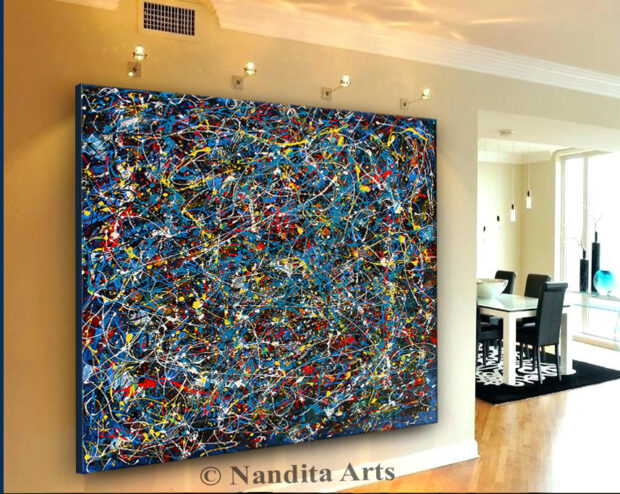 March 5, 2021 / 763
It is hard to find peace in bustling city life. That’s why some people dedicate an entire room to create a place of tranquility. However,... Continue reading